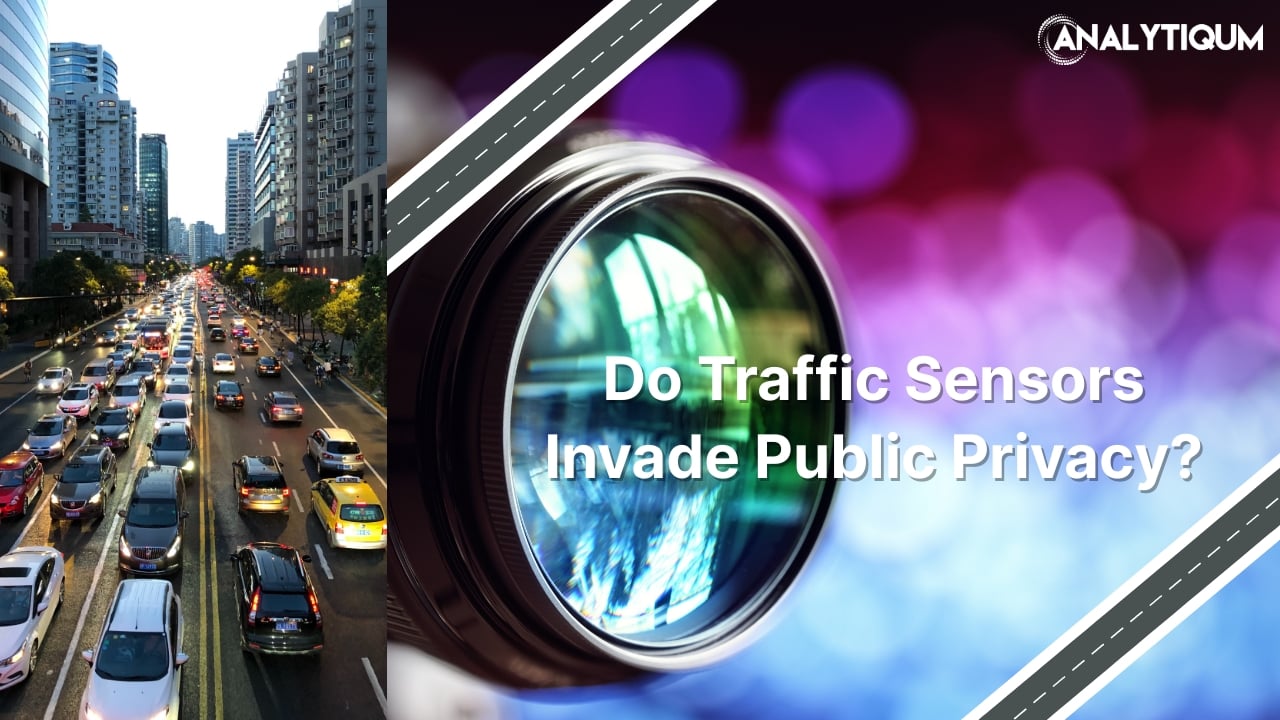 As cities become “smarter,” more and more sensors are being put in place to collect data on traffic, parking, and other aspects of urban life.

Some experts say they do invade our right to privacy, some people argue that these sensors are a form of government surveillance, collecting data on people’s movements and interactions.

Although concerns have been raised regarding the benefits of using such technology, traffic sensors assist monitor traffic patterns and enhance public safety.

So what do you think? Are traffic sensors a necessary part of modern infrastructure, or an intrusion on our privacy?

Read more to find out what’s being done to protect our privacy as we move into a smart city future.

What are traffic sensors and what are their primary purpose?

Traffic sensors are an important part of any smart city or smart mobility infrastructure. They are used to gather data about traffic patterns and congestion, which can then be used to improve transportation planning and operations. Sensors can be placed on streets, highways, and bridges, as well as in vehicles themselves. The data they collect can be used to help optimize traffic flow, prevent accidents, and even reduce emissions.

There are several different types of traffic sensors, each with its own advantages and disadvantages. Some of the most common types include inductive loop detectors, microwave radar sensors like RTMS ECHO, video-based detection cameras like AUTOSCOPE, and Bluetooth-enabled detection devices like DEEPBLUE.

Traffic sensors are an important part of any smart city or smart mobility initiative. They help transportation planners and engineers make better decisions about how to direct traffic flow and manage congestion.

If you want to know more about the type of traffic sensors we propose like Autoscope, RTMS, and DeepBlue, book a 30-minute introduction online call at the link below :

How are traffic sensors placed and who decides where they go?

There are various types of traffic sensors, including inductive loops, video cameras, radar units, and wireless detection units. They can be placed either above ground or below ground, and are typically mounted on existing infrastructure such as stop signs, intersection stop lines, curbs, median strips, or highway overhead gantries.

The decision about where to place traffic sensors is made by transportation planners and engineers. They use computer modeling to simulate different traffic scenarios and choose the best location for the sensors. Factors that are considered include traffic volume, traffic patterns, congestion, and safety.

There are a number of factors that go into deciding where to place traffic sensors. First, transportation planners need to identify major bottlenecks or trouble spots in the transportation network. These are places where there is often heavy congestion or where accidents tend to happen more frequently. Once these trouble spots have been identified, traffic engineers can then begin to determine the best locations for sensors.

Sensors need to be placed in locations where they will be able to collect the most data possible about traffic conditions. This usually means placing them in areas with a lot of traffic, such as on highways or busy city streets. However, it is also important to make sure that sensors are not placed too close together, as this can cause data interference.

The placement of traffic sensors depends on the specific application. For example, if the goal is to count vehicles for congestion detection or incident management, then sensor placement might be dictated by roadway characteristics such as lane configuration or traffic volume. If the goal is to measure travel times for route guidance or transit dispatch, then sensors might be placed at strategic locations such as intersections or turns. Ultimately, it is up to the traffic engineers to determine the best location for traffic sensors based on the specific goals and objectives of the project.

How can traffic planners ensure that the benefits of traffic sensors outweigh the privacy concerns?

It’s a balancing act for transportation planners, who must weigh the benefits of smart city sensors against privacy concerns. On the one hand, sensors can help improve traffic flow and keep people and goods moving smoothly. They can also make cities more efficient by monitoring energy use, parking availability, and other factors.

On the other hand, many people are worried about the potential for misuse of data collected by sensors. For example, could someone track our movements if they had access to traffic data? Privacy advocates are also concerned about how data might be used to target ads or influence our behavior.

So how do transportation planners ensure that the benefits of sensors outweigh privacy concerns? By implementing strong controls on data use and ensuring that citizens have a say in how their data is collected and used.

There are a number of ways to control data use, including:

– Collecting only the data that is needed for the specific application

– Anonymizing data so that individuals cannot be identified

– Securing data so that it cannot be accessed by unauthorized individuals

Citizens also need to be involved in the decision-making process about sensor use. This means providing them with information about how sensors will be used and giving them a chance to voice their concerns. It is only through openness and transparency that transportation planners can ensure that the benefits of traffic sensors outweigh the privacy concerns.

Another way transportation officials can mitigate privacy concerns is by using anonymous data or data that has been scrubbed of personal information. Traffic planners must take steps to ensure that data collected by the sensors is anonymous and cannot be used to track individuals. They must also ensure that the data is used only for legitimate purposes, such as improving transportation systems, and is not shared with third parties for other uses. By taking these measures, transportation officials can ensure that the benefits of using sensors to improve traffic flow continue to outweigh any privacy concerns.

The DeepBlue Bluetooth/WIFI detectors created by Trafficnow, for example, capture wireless device information ( MAC IDs) and send it to a centralized analytics platform.

The MAC address of a Bluetooth, Wi-Fi or Ethernet port is assigned to the device at the time of production and can not be changed.

The Trafficnow’s DeepBlue Sensor system is utilized to produce average travel times and percentage traffic distribution based on active, visible, and accessible Bluetooth signals. This is a unique and cost-effective technology that may give aggregated road segment information while still protecting the individual’s privacy.

The MAC address is not linked to anything but the device brand.

To avoid any possibility of tracking a Bluetooth MAC address the sensor supports a variety of encryption options that can be defined for each project. The selected encryption key will generate an irreversible, one-way hash code. Only Bluetooth hash codes are transmitted to the central server.

Please book a 30 min introductory discussion on how the DeepBlue Sensors are providing the best travel time information without compromising the privacy of the citizens. https://swiy.co/deepblue

How can we protect our privacy while still benefiting from the use of traffic sensors?

There are a few ways that citizens can protect their privacy while benefiting from traffic sensors.

Using traffic sensors, including encrypting data collected by the sensor, anonymizing data before it is shared with third parties, and ensuring that individuals have a right to opt out of having their data collected. Anonymizing the data means stripping out any information that could identify individuals – such as their names, addresses, or license plate numbers. Once the data is anonymized, it can be used by city planners without fear of violating anyone’s privacy. Ensure that the sensors are properly secured and that the data is encrypted before being transmitted.

Another way to protect privacy is through encryption. This means encoding data in such a way that only authorized parties can read it. By encrypting traffic data, city planners can rest assured that the data cannot be accessed by anyone who is not authorized to do so.

Additionally, citizens can use a VPN or proxy server to obscure their identity when accessing the sensor data.

Finally, another way is to allow the citizens to demand transparency from the city or municipality regarding how the data will be used and shared. Transportation authorities should be transparent about how they are using traffic sensor data and what measures they are taking to protect privacy. This transparency will help build trust between citizens and city officials and will ensure that everyone involved in deploying and using traffic sensors can benefit from the technology.

While traffic sensors undoubtedly provide a number of benefits to city streets and the commuters who use them, it is important that their installation does not come at the cost of citizens’ privacy. City officials must take great care in designing sensor systems that protect the privacy of passersby while still gathering the data needed to optimize traffic flow. With careful planning and execution, cities can enjoy all the benefits of smart traffic sensors without compromising the privacy of their citizens.

By implementing strong controls on data use and ensuring that citizens have a say in how their data is collected and used, we can protect our privacy while still benefiting from traffic sensors.

Citizens and commuters benefit greatly from the installation of traffic sensors in city streets. These smart sensors help to optimize traffic flow and reduce congestion, making for a smoother, faster ride. At the same time, it’s important to protect the privacy of citizens who pass by these sensors.

It’s important that cities find a way to balance the need for efficient traffic flow with the privacy of those who use the streets every day.

Do you think traffic sensors invade public privacy? Let us know your insights in a 30 min introduction call. Book your time slot in the link below : https://swiy.co/bookameeting